Tucked away in a wild, quiet corner of Kenya’s mighty Masai Mara, Sala’s Camp is privileged to witness one of the greatest shows on earth. 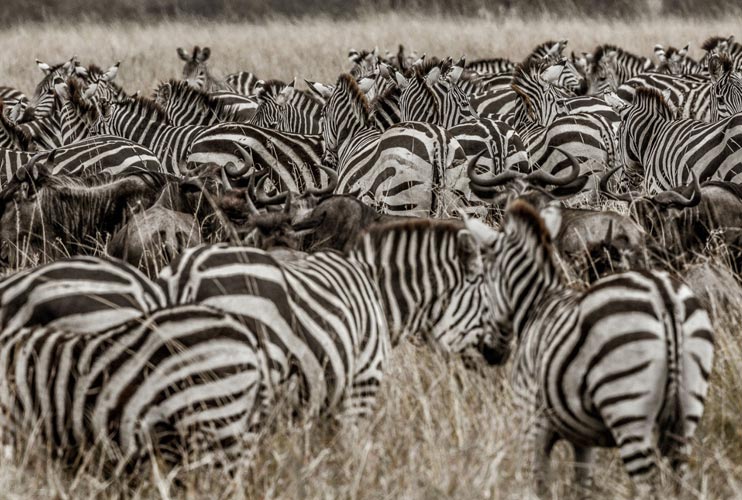 Situated close to the Tanzanian border in the south of the reserve, Sala’s is one of the first camps in the Mara to experience the legendary annual migration of wildebeest, which thunders by from June to September each year. 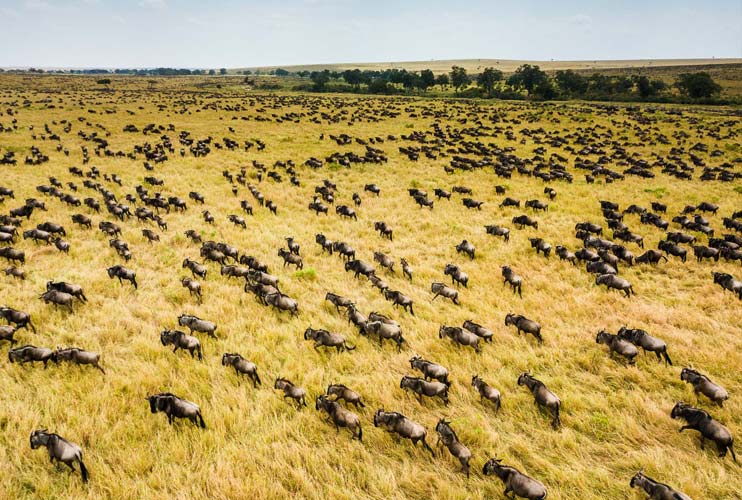 Wildebeest herds are constantly on the search for food and are active day and night ©Scott Ramsay.

Over 1.5 million wildebeest, zebra and antelope migrate clockwise around the Serengeti-Masai Mara ecosystem, travelling 800 kilometres and taking in two different countries as they court, mate, give birth and die along the way.

‘The migration of nearly two million wildebeest and zebra in the Masai Mara is the most astonishing terrestrial wildlife event that I’ve seen. It was my first time to witness it, and it exceeded my high expectations. – Scott Ramsay 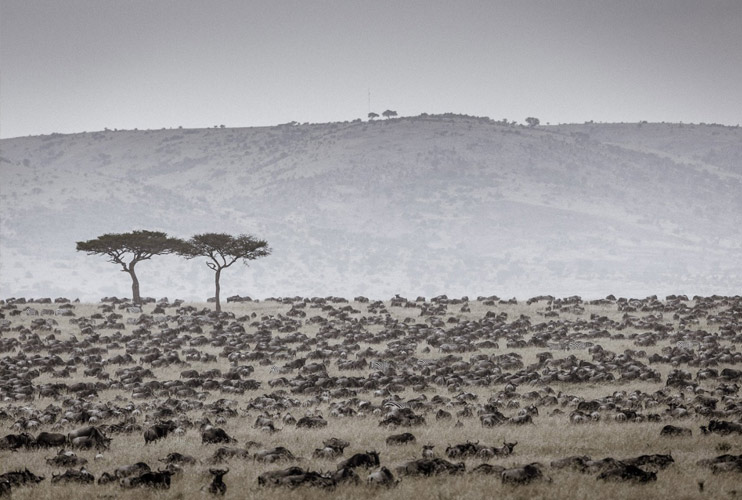 There was thought to have been about 250,000 wildebeest in 1960 and now there are approximately 1.5 million ©Scott Ramsay.

The arrival of the Mara migration was a little late this year due to an ample supply of grass in the Serengeti. However, after a period of eager anticipation, we were delighted to welcome thousands upon thousands of wildebeest earlier this month as they crossed the invisible border from Tanzania into Kenya. 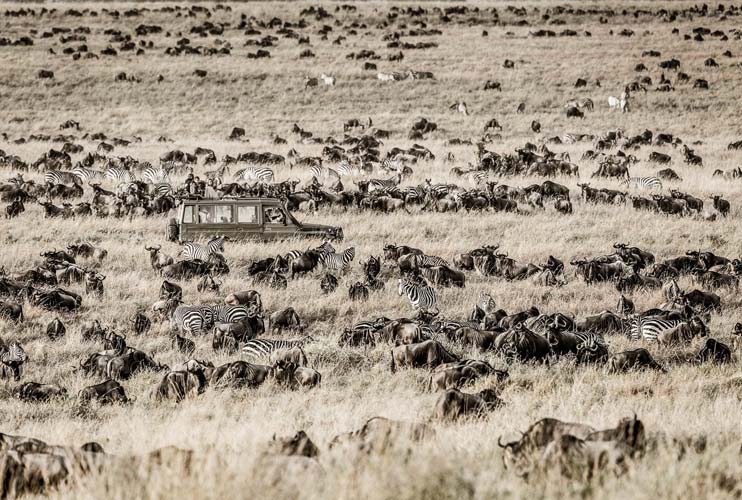 In their path lies the Mara River, rocky, deep and wide, where crocodiles lurk looking for easy prey. This is one of the highlights as the animals enter a game of roulette to cross the treacherous river, home to the largest crocodile population in Africa. 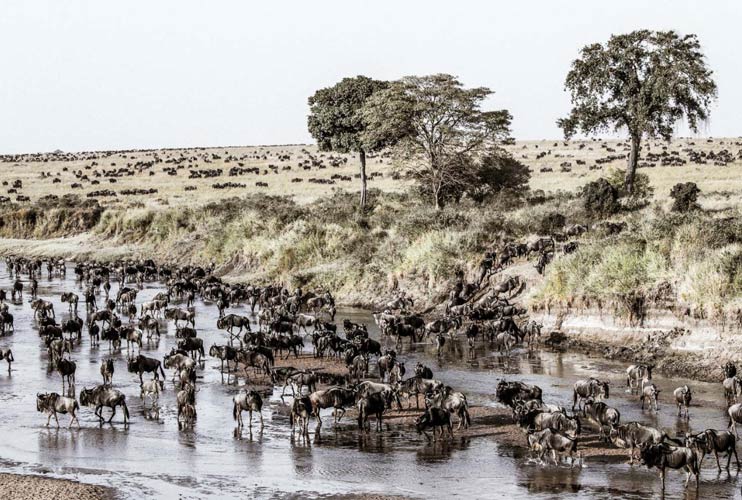 During the migration, approximately 6,000 wildebeest drown while crossing the Mara River ©Scott Ramsay

Dust flies as hordes of wildebeest clamber to cross the water, providing a mind-blowing wildlife spectacle. Although such crossings appear to be a chaotic frenzy to onlookers, the animals operate a system of ‘swarm intelligence’, conquering predators as one mass together. 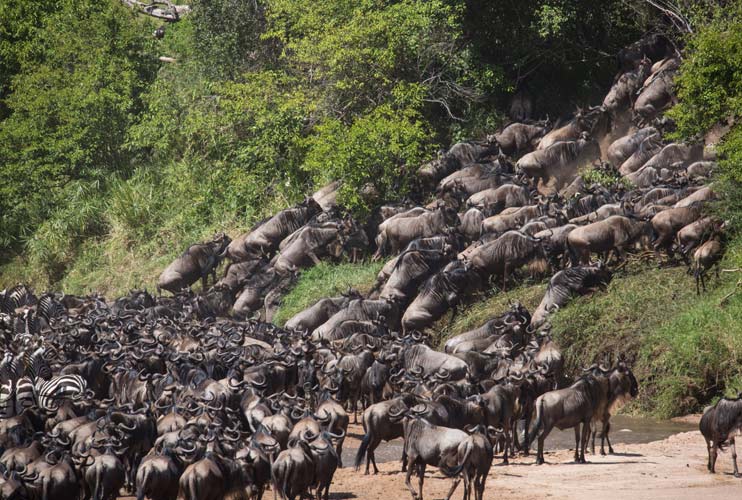 Watching the migration is an exhilarating, bucket list experience.

Sala’s Camp is in a prime migration-viewing location. We often enjoy our own mini-crossings in front of the camp as the wildebeest scurry across the Sand River, a calm comparison to the murky, crocodile-infested waters of the Mara River. 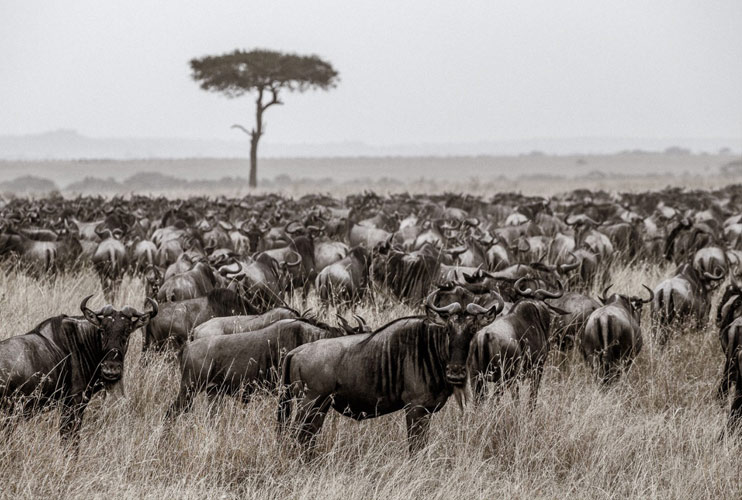 Wildebeest split into smaller groups called “mega herds” to ensure that their resources are distributed amongst the group ©Scott Ramsay.

Sala’s is a 45-minute drive from the key crossing points. This enables our guests to be close enough to easily enjoy the action but also far enough for us to escape the congregating crowds that flock to see this famous phenomenon. 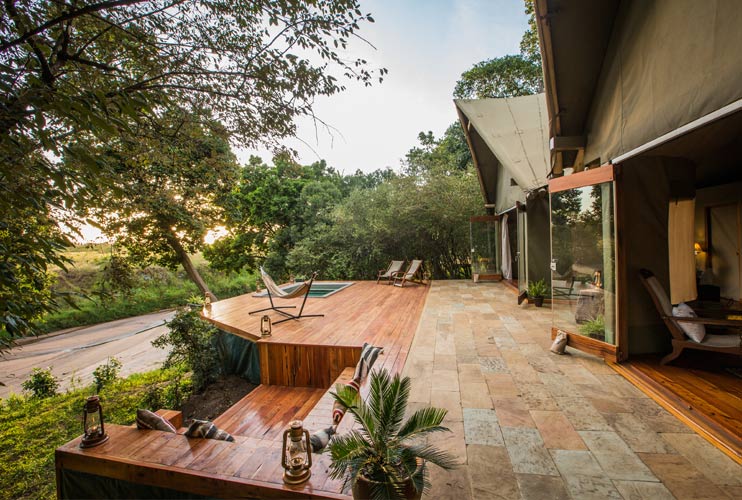 The tents at Sala’s Camp are secluded and comfortable ©Scott Ramsay.

A beautiful base to explore the magical migration, Sala’s guests can relax in a casual elegance of safari ‘days gone by’ whilst enjoying contemporary touches like plunge pools and glass-fronted tents. 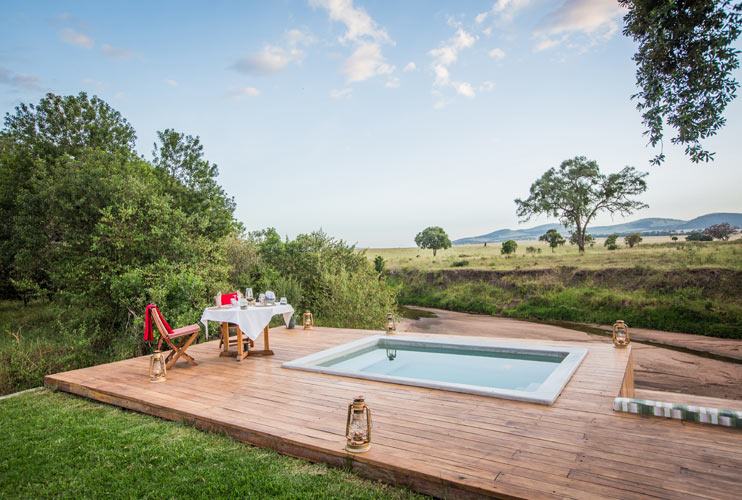 Each tent has a private plunge pool to cool off in after an exciting morning exploring the Mara ©Scott Ramsay.

To celebrate the arrival of the wildebeest we will be extending Sala’s closure dates to 12th November 2018. We have small pockets of availability from mid-October onwards. Get in touch using [email protected] to book your Mara adventure.