HOW TO CAPTURE KENYA

In March, National Geographic photographer Robin Moore returned to Kenya and The Safari Collection’s properties to host another Cultural Photographic Safari. The trip was a success and with the early arrival of the green season, dramatic skies and vibrant grasslands made for a magnificent back drop to the wildlife and cultural experiences that were captured. Having travelled the world, Kenya has always held a special place in Robin’s heart and never disappoints in offering new photographic opportunities and challenges. Do you want to find out how to take fresh and creative photos during your safari?

“Each time I return to Kenya I challenge myself to capture familiar locations with a fresh perspective. During this year’s photographic safari we were presented with a unique set of challenges and opportunities, as storm clouds rolled across lush green landscapes typically baked under deep blue skies. I found the conditions pushed me creatively to capture some of my favourite images to date. I have distilled the process behind some of these into my top 10 tips for making the most out of your own photographic safari. My top tip, however, is join me on a photographic safari next March to put these into practice! 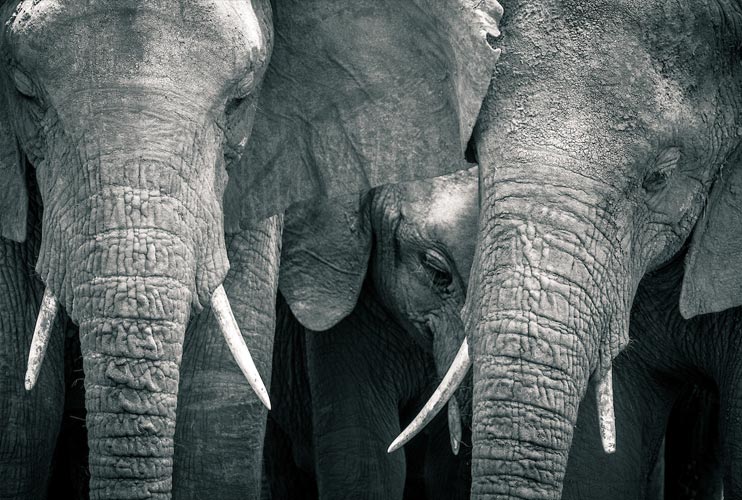 1. RISE AHEAD OF THE SUN. I have never been much of a morning person, but those minutes before the sun spills above the horizon are a magical time for photography. Get yourself in position ahead of time so that you are not charging across the savanna in search of wildlife as the sun appears. At Giraffe Manor I didn’t have to travel far on my first morning to catch majestic animals in the perfect light. I peeled back my curtains at 6:25am to be greeted with the sight of a Rothschild’s Giraffe craning to an upper balcony, bathed in the warm glow of a spotlight, making it really stand out against the cool blue hue of dawn. I moved onto my balcony and composed the shot, making sure to include the warm light of the dining room for added interest and depth. The following morning the guests on my photographic safari convened on my balcony at 6:25am to capture their own interpretations of the magical scene. 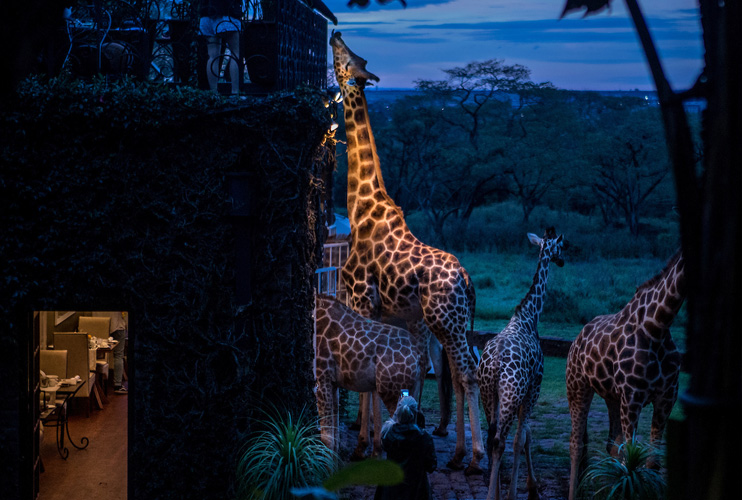 2. CONSIDER YOUR OPTIONS.  There are many ways to photograph people feeding giraffes at Giraffe Manor, and for this image I decided to move in closer to focus only on the mouth and tongue outstretched to a person’s hand. Moving in so close allowed me to throw the background out of focus, honing attention on the interaction between giraffe and human. What you exclude from an image is as important as what you include, and the strongest images are often those that are stripped to their bare essence. If adding elements to a photograph doesn’t strengthen it, leave them out. 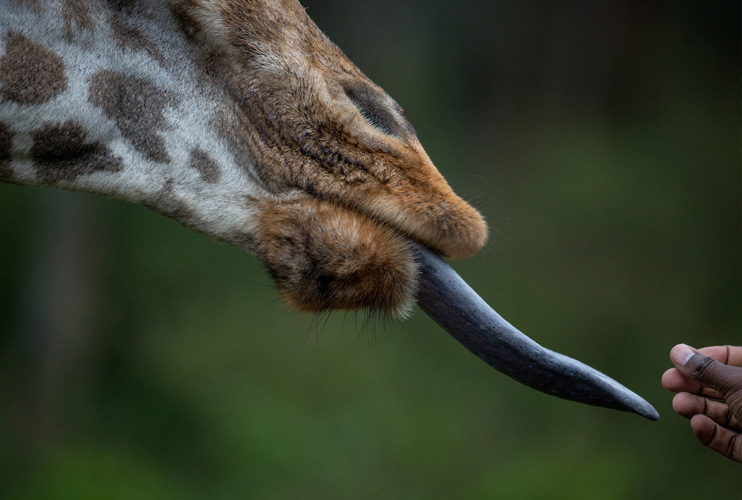 3. PUSH YOURSELF AND YOUR CAMERA TO THE LIMIT. Many of the most interesting images are made at the limits of what you think are possible. This photograph of zebras on the Solio skyline was captured as the last vestiges of light were draining from the sky. I pushed my ISO up to 5000 to enable me to keep shooting, as I was intrigued by the increasingly bluish hue of the clouds, and figured that an image with a bit of noise (an artefact of high ISO) was better than no image. As long as there is light, there are photographs that can be made, so don’t be afraid to push your settings – and your ISO – beyond your normal comfort levels to see what happens. You may be pleasantly surprised with the results, as I was here. 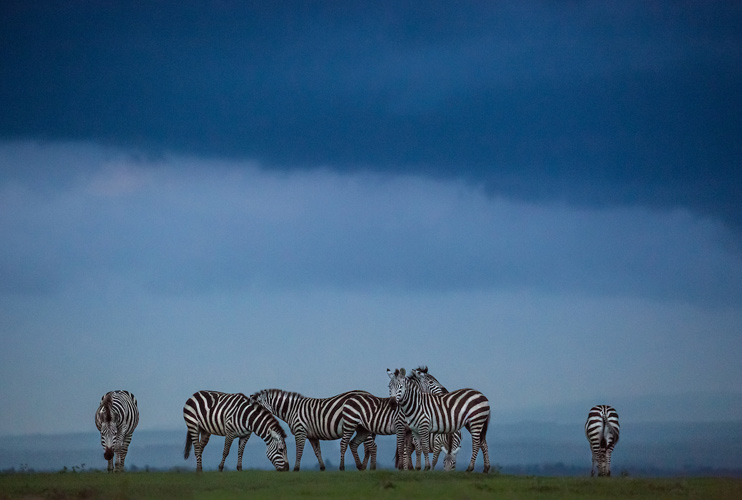 4. CAPTURE MOVEMENT. Try experimenting with slower shutter speeds to add some motion blur to moving subjects. This image of Samburu warriors dancing was captured with a shutter speed of 1/10 second, with the camera tracing the movements of the jumping warriors to make them appear sharp relative to a blurred background. Often, once I have the “safe” shot of a scene, where I have frozen the moment, I try to experiment with slower speeds like this to produce more interesting results.

5. FIND GOOD COMPOSITION, THEN WORK ON IT. In Solio our group of budding photographers was drawn to these wending water-filled tire ruts shimmering in the late afternoon light. We stopped and spent time shooting the somewhat abstract scene, observing how the changing light affected the images. The winding ruts provided the ideal leading lines to guide the eye through an image. As we explored different angles and focal lengths, a reticulated giraffe appeared, moving slowly across the skyline and into the frame. As more appeared we were able to carefully choose the moment when the outline of three giraffes (an odd number of subjects tends to be more pleasing to the eye than an even number) added the perfect finishing touch to our composition.

6. USE NATURAL FRAMES. Natural frames provide structure and guide the eye to the points of interest in a photograph. The yellow fever tree forests of Solio are one of my favourite places to shoot: majestic animals move through gnarled trunks and twisting branches. When I saw a mother white rhino and her calf grazing in this clearing behind a trunk bent into a perfect frame, I moved to shoot the rhinos through the opening. I crouched and waited patiently as the rhinos grazed with their backs to me until finally they turned and ran through the frame. 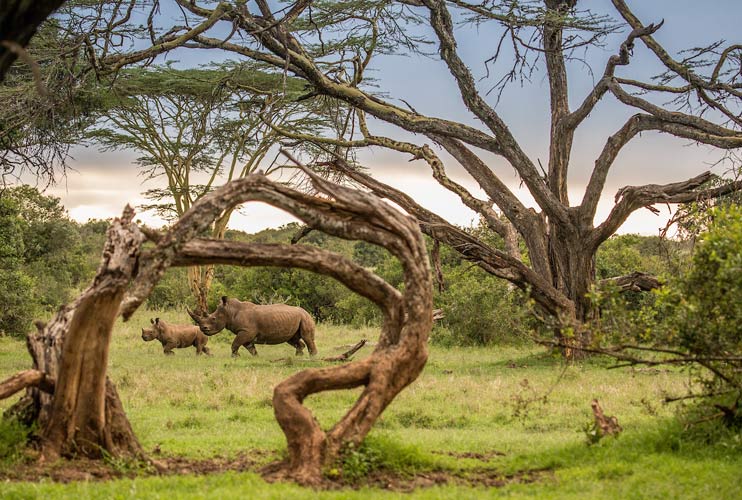 7. SHOOT INTO THE SUN. When the sun is low in the sky, the decision of which direction to shoot in is a big one. Shooting with the sun to your back is generally the safe option as it bathes your subject in warm morning or evening light. But shooting into the sun can produce more interesting results, and so I often orient myself so that the subject is between me and the sun. This photograph was taken in the late afternoon in Solio – the rays of light slanting through the clouds provided a dramatic backdrop to this white rhino. I chose to present this one in black and white to increase the drama. Shooting into the sun also added to the mood of the following photographs of giraffes at sunset. 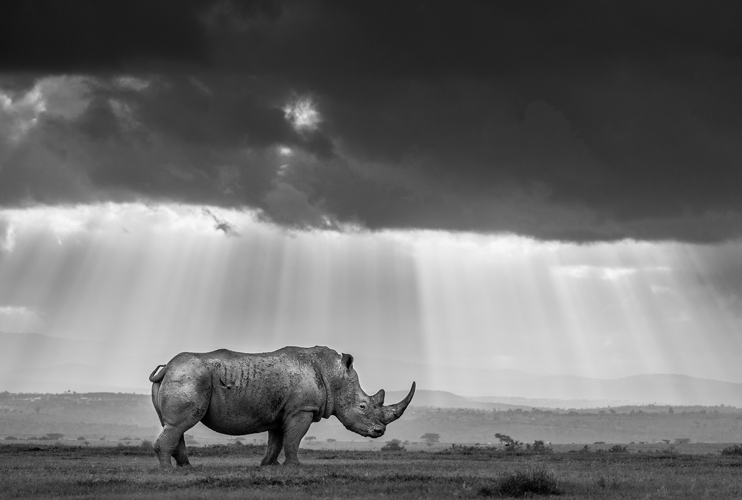 8. UNDERSTAND (AND RESPECT) the behaviour of wildlife you are photographing. There is a lot of chance involved in wildlife photography, but a little understanding of the natural history of the animals you are shooting can go a long way. In the late afternoon of my second to last day in Solio, my trusty driver and knowledgeable guide Amos helped to locate a group of browsing Reticulated Giraffe. Knowing they would likely move together across the plains at dusk, I positioned myself to capture them silhouetted against the sunset. The giraffes started to move on cue, and even though they did not travel in exactly the direction I hoped they would, I was able to move on foot to capture this image of their majestic forms floating across the plain. I composed the shot so that the giraffes were moving into the frame, and when the sun poked briefly below the clouds, it gave me my point of interest on the right of the frame towards which all nine giraffes were moving. By closing my aperture down to f/32 I was able to produce starbursts emanating from the sun. An understanding of wildlife natural history and behaviour will also help ensure you do not negatively influence the wildlife you are photographing in a bid to get the shot. 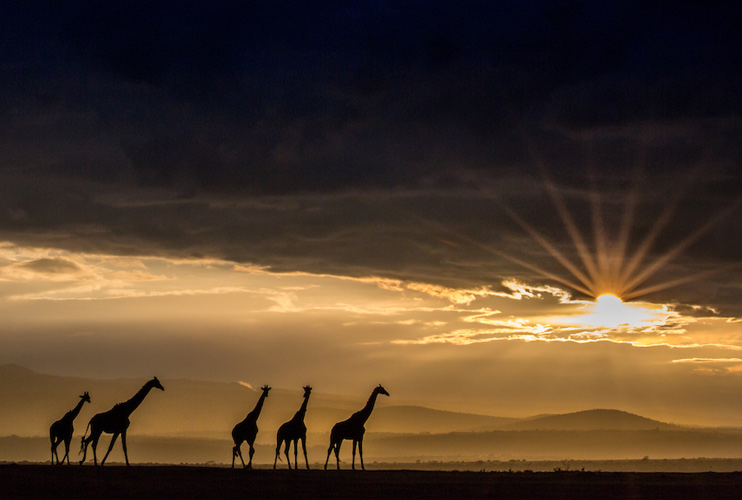 9. EMBRACE BAD WEATHER. I often hear people remark “isn’t the light great?” simply because there is a lot of it. A cloudless midday sky if often the least interesting (and most challenging) to shoot in. Bad weather, on the other hand, can bring surprise and drama. We headed out one afternoon in Solio when it was raining so hard that it was tempting to call it quits and go warm ourselves by the fire. Our will power was rewarded by the sight of this majestic black rhino standing defiantly in the pounding rain. 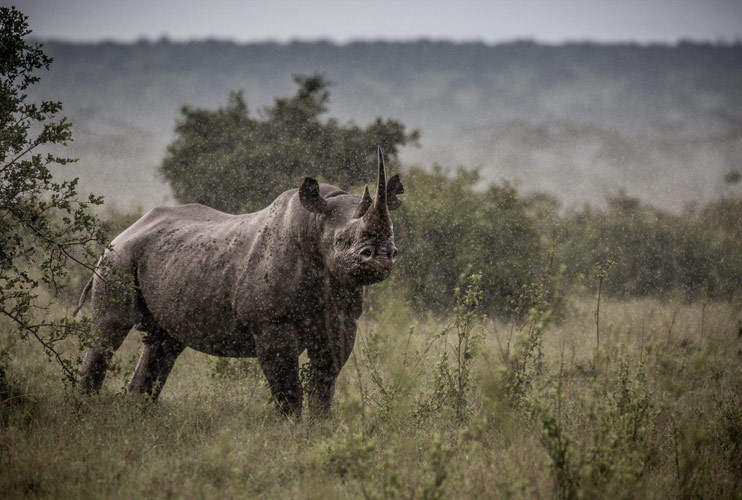 10. GET UP CLOSE AND PERSONAL with the small stuff. Sure, a white rhino under a brooding sky is dramatic, but smaller critters offer an opportunity to bring out detail and textures that are barely visible to the naked eye. I was determined on this trip to find a chameleon – one of my favourite of all animals – and was lucky enough to find a couple of Jackson’s Chameleons in a tree right in front of Solio Lodge. The best time to find chameleons is at night, with the help of a flashlight. I shot this handsome creature with a 100mm macro lens, a flash attached to a cable (I like to get the flash off the camera as this directional light brings more dimension to the image) with a small foldable soft box attached to the flash to increase the size of the light source, causing the light to wrap around the animal and softening shadows (the closer the soft box is to the animal, the larger the relative size of the light source and the softer the shadows). Shooting at night allowed me to isolate the animal against a black backdrop, emphasising the details, colour and texture of the animal without distraction.” 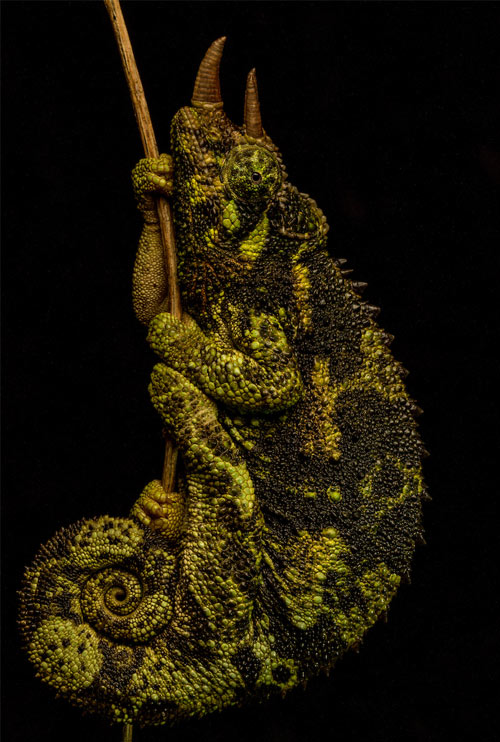 Robin Moore will be hosting another Cultural Photographic Safari in March 2019. If you are interested and would like to find out more, please contact The Safari Collection using [email protected]