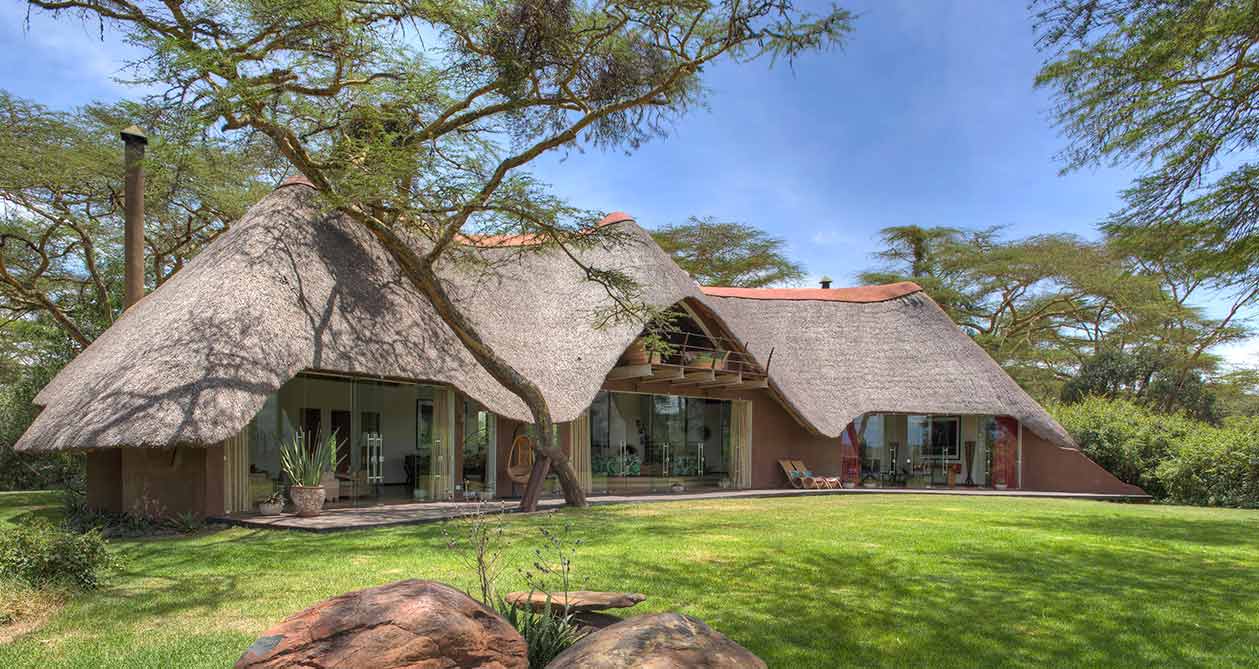 Solio Lodge is located on a private wildlife sanctuary, tucked in the valley between the lofty slopes of Mount Kenya and the peaks of the Aberdare Mountains, directly north of Nairobi. This intimate and luxurious lodge opened in August 2010 and remains the only guest accommodation on the incredible 45,000-acre Solio Game Reserve. The Solio Reserve is internationally recognised as the most successful private rhino breeding reserve in Kenya and visitors will find that sightings of up to 40 rhinoceros at a time are not uncommon. The wildlife experience here is intense and exclusive with 19,000 acres of conservancy surrounded by 45,000 acres of ranch and just one lodge, Solio Lodge, in the middle of it. Solio Lodge can be booked directly with The Safari Collection, as part of a bespoke itinerary that we can create for you or through your local agent or tour operator.

See large numbers of white and black rhino in a 19,000 acre sanctuary

TOP 5 THINGS TO DO

At Solio Lodge we offer a wide range of activities including game drives, horse riding, a visit to a Kenya coffee plantation and birdwatching. You can also take a helicopter to nearby Mount Kenya and for a hilltop picnic breakfast or go trout fishing in the Aberdare National Park. Back at the Lodge you can relax with the help from our massage therapists who are available for in-room treatments.

TAKE A SCENIC HELICOPTER FLIGHT TO NEARBY MOUNT KENYA

SPOT LEOPARD, LION AND CHEETAH ON A GAME DRIVE

The lodge has five contemporary luxurious cottages with private decks and panoramic views of the nearby hills and Mount Kenya in the distance. Each room has a private lounge area with open fire for cooler evenings, as well as large en-suite bathrooms with a double sink, bath and shower. Solio Lodge takes full advantage of its spectacular surroundings. Vast floor-to-ceiling windows frame distant Mount Kenya and outdoor sundecks afford panoramic views. One of our luxurious cottages can be turned into an interconnected family unit with two en-suite bedrooms, sleeping up to five guests.Dinner is often served outside under the stars within sight of grazing waterbuck, zebras, and impalas. Our chefs use fresh organic ingredients from Solio Lodge’s own vegetable garden. All guests enjoy full-board during their stay, which includes all meals and most drinks, excluding champagne and specially imported wines and spirits. It also includes all activities such as game drives, sundowners, bush meals, horse riding and walking. Children are welcome at Sasaab and under threes stay free, we can offer a baby  listening service and special meals can be organised by prior arrangement. All of our spa treatments at Solio use Healing Earth products and an assortment of natural Kenyan ingredients.

Solio Lodge is situated in the Highlands region around Mt Kenya and Aberdare National Park which has a higher altitudes, and is therefore generally warm during the day and cool at night, so pack accordingly. The tempreture remains fairly consistent throughout the year, however June, July and August are generally cooler. The Lodge is open year round, apart from November, when it is closed for maintenance

When: Solio Lodge first opened its doors in 2010.

Why: The Carr-Hartley family has strong historical ties to Solio, which became Kenya’s first private game reserve and rhino sanctuary. Formerly a working cattle ranch, it was transformed into a wildlife sanctuary in 1973, and Mikey’s father and uncles were asked to relocate rhinos and other wildlife back into the area. This attracted Mikey and his father to use the sanctuary as a location for their mobile safaris. When the opportunity arose to create an exclusive five bedroom property on a 49,000-acre ranch with over 200 rhinos, the decision was easy, and this unique and historical destination was added to the portfolio.

The inspiration behind the design: Simple, chic and modern, Solio offers a fresh look at lodge design. The glass frontage and large spaces allow light and views of Mount Kenya to flood into the rooms. Tanya and Mikey chose to veer away from a traditional rustic lodge feel, towards a cleaner look with plants as an interior theme, embracing the vegetation around the area. Guests can unwind in a double-ended bathtub, gazing out at the star-lit night’s sky. If you are thinking of staying at Solio Lodge and want to explore further a-field, our recommended itineraries, which include Solio Lodge, could be just what you are looking for. Or talk to us about creating a bespoke itinerary just for you.

We create all kinds of amazing tailor-made, safaris in and around East Africa. If you can’t find exactly what you are looking for, talk to us about creating a bespoke itinerary for you.

The Safari Collection owns and operates a portfolio of luxury boutique camps and lodges in Kenya's finest locations. By choosing to stay at one or more of our properties, you can explore the diverse landscape and culture that Kenya has to offer.

CAN’T FIND WHAT YOU ARE LOOKING FOR?